In an article yesterday on BuzzFeed News, writer Anne Helen Petersen addressed another of Hollywood’s dirty little secrets. In her piece, Anne Hathaway Syndrome, she revealed to this Hollywood outsider that people hate Anne Hathaway. I’ve been on vacation for 2 weeks, but I don’t think I was living under any cobblestone streets. When did this happen? I LOVE Anne Hathaway. 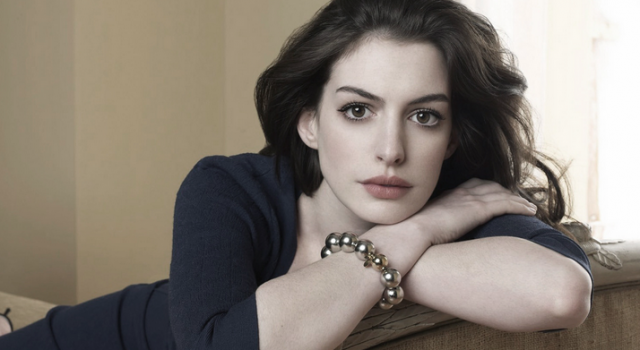 I’ve loved her since her Princess Diary days and her portrayal of Jane Austen in Becoming Jane, but my all-time favorite for now is The Devil Wears Prada. It’s my humble opinion that Anne Hathaway is our modern day Audrey Hepburn or Grace Kelly. She is beautiful, poised, talented and extremely fashion savvy.

Petersen shares this as her evidence of said hatred:

The first symptoms of Anne Hathaway Syndrome appeared in the run-up to the 2013 Oscars, when the composed, on-point Hathaway (nominated for Best Supporting Actress for her performance in Les Miserables) became a natural foil to Jennifer Lawrence’s cool girl tsunami. If Lawrence was the girl both men and women wanted to drink beers with, then Hathaway was the one dominating the conversation at the cocktail party. Or so it seemed, and so the internet reinforced: “Why Do Women Hate Anne Hathaway? (But Love Jennifer Lawrence?),” posed New York Magazine; “Anne Hathaway vs. Jennifer Lawrence: Why we hate one and love the other,”The Globe and Mail explained; “The Happy Girl vs. The Cool Girl: Why People Don’t Like Anne Hathaway,” wrote Indiewire. The New York Daily News even interviewed people on the street about their hatred of Hathaway: “She’s trying too hard to please everyone,” said one 28 year old from Queens. “We’re over it.”

Call me crazy, but I do not interpret Anne Hathaway’s earnestness to succeed and achieve personal goals as “trying too hard to please everyone.” And my second not-so-crazy notion, is this, “who the heck cares what Jennifer Lawrence is doing compared to…. anyone?” This is a new gossip tactic that I frankly do not comprehend. It’s one thing to talk over the back fence about who’s pregnant with who’s baby, or who’s divorcing, who’s now a woman that was a man or what kind of car the pope is driving, but comparing “coolness”? How juvenile! Who defines coolness? And since it changes with daily temperatures, I’m willing to bet that if Jennifer Lawrence continues in her personal successes, it won’t be long until the action heroine is defending her bed of roses to the social “kat-i-ness” of the media.

In today’s world where we are continually addressing the issue of bullying in our schools, it is appalling to me that we would not call this what it is. A group of green-eyed antagonizers who can’t deal with their own insecurities and make it their business to heckle and tyrannize the graceful and self-assured. I myself, cannot begin to think of Anne Hathaway as a victim, but she could darn well become an advocate for those who suffer from fool’s syndrome.