Day 27: Starting Over with a Newborn 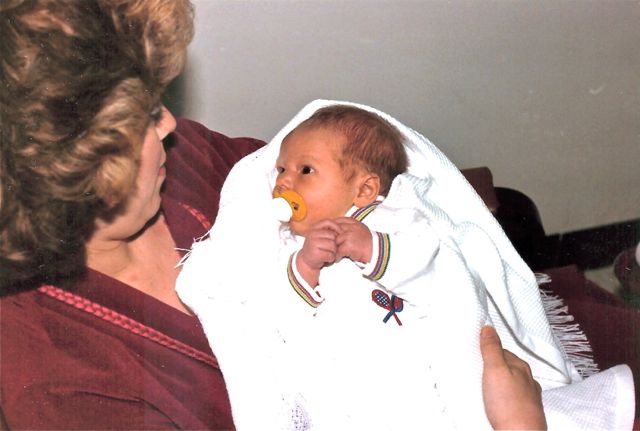 “What do we do now?” I ask my husband as we walked into our home with our firstborn 28 years ago. I had read all the books, attended birthing classes, help raise my two younger sisters, but walking into our home holding a newborn was very intimidating. I couldn’t remember what the book said. Should I just sit and hold him, or should I put him in his bassinet? Should I feed him on demand or put him on a schedule? Should I pick him up when he cries, or “train him to comfort himself?”

I so wanted to do it all right. I wanted to be the proverbial perfect mother, even though everybody says there no such thing. “I would be different!” I would keep a perfect house, cook delicious meals, make my husband the happiest man on earth and my children would worship me.

One month later I was on the phone crying to our pediatrician, “I don’t know what’s wrong with me!” Of course, he said I was experiencing postpartum blues. Well, I wasn’t going to have those either! This is not going as I had planned.

Then, two wonderful things happened. A friend of mine called me and as I cried to her on the phone, she said, “I’m coming to get you and we are going out for the day.” My recollection is that we went to K-Mart. It was one of the most fun days of that year! I was out of the house doing normal things. My son was all bundled up and seemed to be enjoying himself as well. When we returned home, he took a 3 hour nap and I did too!

Then, a few days later, I’m (yes, crying on the phone again) talking to my mother-in-love and she offers to come spend a few days with us, so I can get some rest. I was already madly in love with this woman, but now she was up for canonization for life. She moved in with us for 3 wonderful days. She did my laundry, prepared formula, helped me cook dinner, and the most wonderful thing of all, she got up every night with my son, so I could sleep.

One night in particular I heard her up with him and just wanted to peak into his room to see them together. I wish I had taken a picture. She was holding him so close and looking straight into his eyes while he drank his bottle. And he was looking into her eyes, seemingly listening to every soft word she spoke. She says to this day, that that was their bonding night.

My son had been born by emergency c-section so I was recovering from that as well and just wasn’t cognitive of how exhausted I was. I think now, looking back, I was just going through whatever motions I thought I was suppose to go through – up until that night. I witnessed LOVE in that room. As my abused friend said to me recently, “love is a feeling, but more than that, it is an action,” and while my sweet mother-in-love allowed me to rest, she was also bonding with her new grandson. She was enjoying him. Her love was an action.

I think on some subconscious level, I realized that night what was really important. It was more important to enjoy my son, than to have a perfect house or have a home-cooked meal every night. I also got some much needed sleep and began to feel better physically. But most all, I knew after those 3 days with my mom-in-love… what to do now.