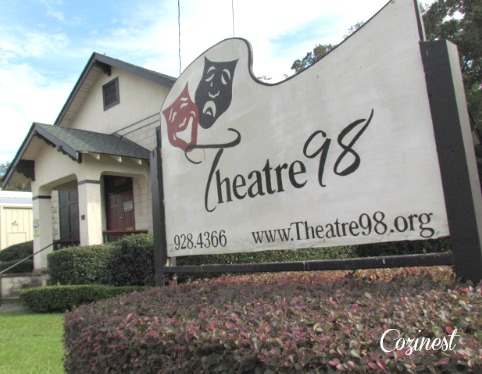 Positioned on the corner of Church and Morphy, in Fairhope, AL, Theatre 98 is several blocks from Highway 98 (its namesake), but it would be just fine with this “critic” if this little house of players became the main “thorough fare” of the Eastern Shore.  In the 1970’s the former group of volunteers that originally formed the theatre became dormant, but in November of 1982 they “started over” and moved to their current location in 1985.

It is a fun night out in the community, and if all plays were performed like tonight’s, 98 seats wouldn’t hold the audience.

Night Watch, a play written by Lucille Fletcher, and originally performed in New York City in 1972; was directed tonight by Leslie Johnson.  This was Ms. Johnson’s directing debut, but we’ve been blessed many times by her treading of the boards.

An insomniac looks out her apartment window and screams to the top of her lungs. I jump out of my seat. We are season ticket holders with front row seats of this little theatre. The actors perform on a small, open stage and the audience fills about 98 seats surrounding it. We could reach out and touch the actors if we wanted, so to say that this blood curdling scream caught me off guard, well, let’s just say that my jump didn’t go unnoticed by the audience.  I could have been the only funny thing that happened in this suspenseful, unpredictable play.

The original reviews of this play back in 1972 were very good, with Joan Hackett playing the lead, and Elizabeth Taylor starring in the movie, released in 1973.

The Wheelers live in an upscale apartment in Manhattan, but looking out their “rear window” they have the fascinating view of a run-down, abandon tenement building. Elaine Wheeler, the insomnia-suffering, possibly crazy wife of John, begins to see strange happenings from their living room window.

Played by Anastasia Arnold Ferrell, Elaine Wheeler seems to be a devoted wife, but you just can’t seem to figure out throughout the play if she is really crazy or if something else entirely is going on. Ms. Ferrell did an excellent job with the many twists and turns of her character.

John Wheeler, (played by Rick Drummond) a very successful real estate guru, also keeps you guessing until after intermission when we discover that he and Elaine’s “best friend”, Blanche Cooke are having an affair. Mr. Drummond, who is an attorney by day, is very believable as a successful business man.

The comedy relief of the story is the house servant, Helga, (played by Robin Kemp).  So many times in the play one look from her has the house laughing and you love her character immediately. I’ve heard that timing is everything in comedy, and Ms. Kemp is right on schedule.

Blanche Cook, the friend of Elaine and mistress of John, is played by Pat Marion.  While most of Ms. Marion’s gestures are believable as a mistress, the audience is left to question her loyalty as a best friend throughout the story.  Ms. Marion was convincing as a back-stabbing “friend” and persuaded the audience to dislike her from her first scene.

The five other supporting actors in this play brought intensity, diversion and the right amount of engrossment to keep the audience attuned. Ms. Johnson did an excellent job in her directing debut and as I told her as I left the theatre, “if this is a debut, I look forward to every other play you direct.”

It was a very fun night and we are looking forward to our season tickets next year.  If you happen to be passing through Fairhope in 2014, you won’t find this little theatre on Highway 98, but take a little detour to the corner of Church and Morphy. You won’t be disappointed.

4 thoughts on “Starting Over with a Lil’ Ole Theatre”