I’ve never written about art or any artist in particular (other than to point out a favorite), but on Friday at Fairhope’s First Friday Art Walk, I met the most interesting gentleman. He is William (Bill) Thompson, a former aeronautical engineer, who left the world of creating spacecraft that circle Mars, for the world of art. His creations are likely a lot like his space probes; highly technical, carefully planned and very inspiring. 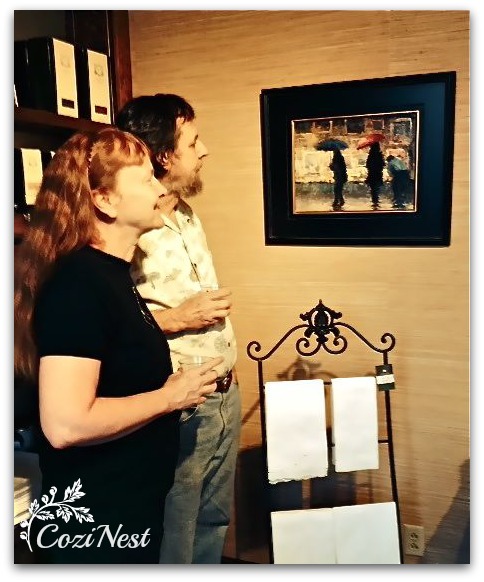 Mr. and Mrs. Thompson live just down the road from Fairhope on Mobile Bay, so we left feeling like we’d just made two new friends that we’d known all of our lives. Isn’t it such fun when that happens? We discussed hurricanes, living on the coast, Bill’s neighbors that we knew in common and the curiosity of working with both sides of your brain. I am in awe of people with this ability. I’ve personally only known two people who have this gift. My son and now Bill Thompson. I’m sure there are plenty of others, I’ve just not met them. We are all usually dominant on one side or the other.

I chose this painting of Bill’s to take his picture beside, because it was the most moving to me. Of course, out of respect for the artist, there is no close up of the painting, so I hope you can see enough to understand my thoughts. (Remember I’ve never reviewed art, so this is going to be just me sharing my heart.) My personal “review” of any art forms’ subjectivity is whether or not it ignites a desire to create in my own psyche.

As I studied this piece, I was taken in by the fact that people usually rush to their destination in the rain, but not these three. We see no faces, because these subjects are studying the art on an exterior wall exposed to the elements. Three people who don’t appear to be together, but are equally mesmerized by the exhibition. Two with umbrella’s, one without, two men? One woman? And what about the art? I want to see it more clearly. Is it painted directly on the wall like graffiti, or is each square a separately framed piece of art? Perhaps that is what this painting is all about. Creating a desire to see art more clearly.

I didn’t ask Bill any questions about this piece, because as I stood speaking with him and his lovely bride, I was mesmerized by his career as an aeronautical engineer. It was fascinating to hear his stories of designing a craft that circled Mars and sent information back to Earth for 9+ years longer than expected.

Equally fascinating is that once I started researching Mr. Thompson, I discovered that his artistry is sending images all over the Earth. He has artwork hanging in the US, England, Switzerland, Belgium, France and Italy. He designed a space probe to circle Mars, and creates art that people of all cultures desire to own, including this writer! We can only hope that his art will circle the Earth 9+ years longer than expected.

Art Walk attendees (like ourselves) are likely to expect a fun night and we’ve never been disappointed. But, as Mr. CoziNest and I stepped out of the Two Old Broads boutique where Bill’s art was on display, we both looked at each other and said in unison, “Now THAT was FUN!”

As I’ve written this post, it has occurred to me why it was so much fun. Bill forced us to use both sides of our brain in hearing his story. His painting, also ignited a desire to create in this right-brained person. I couldn’t wait to tell his story. You can see more of his work here.